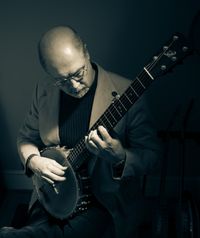 Composer and classical banjoist Michael Nix will perform new music for solo banjos from his New Classic Banjo Project in a live-stream concert, on July 24, 2020 at 7:00 PM EDT (GMT-4), followed by a Zoom question and answer session at 8: 00 PM. This event is sponsored by the Franklin (MA) Public Library.

For an invitation to join the Zoom Question and Answer session following the live-stream concert email: michaelnixmusic@gmail.com

The New Classic Banjo Project was instituted by Nix to develop and record a modern classical banjo repertoire. Compositions will be commissioned on an ongoing basis for 7-string Banjar, the traditional nylon strung five-string classical banjo, the six-string guitar banjo and other banjo hybrids. Nix will record and perform the new repertoire in festivals, conferences, and concerts.

A first round of premier New Classic Banjo Project concerts were performed on March 7 and 8, 2020, with commissioned works by composers Jim Dalton of Boston, Thomas Schuttenhelm of Philadelphia, and Nix’s own compositions for 5 and 7-string banjos. A second season of new commissions and compositions are planned for 2021 featuring composers from Great Britain and the U.S.

Michael Nix performs on classical guitar, banjo, and mandolin throughout the United States and Asia, he has recorded for the PBS series “American Experience”, independent documentaries, and numerous CD projects. His compositions are performed internationally. His music has been heard on “Weekend Edition”, and other NPR programs. He participated in Seegerfest 2014, commemorating the life of banjo player Pete Seeger. In 2017 Nix spoke about and performed his New Classic Banjo Project compositions on a banjo panel at the Smithsonian Museum of American History.